This project was originally created for the class 62-150 Intro to Media Synthesis and Analysis at Carnegie Mellon University in the Fall of 2016. It was orignally posted here. The demo is currently not available for download, however I intend on releasing it when I have access to a VR system again.

The essential idea of this project is to translate the Op-Art works of painter Bridget Riley into an interactive digital museum. The museum is experienced in VR, using the HTC Vive. I believe VR is a perfect platform for this kind of project, as VR itself is an illusory medium. Some interesting fourth-wall-breaking connections can be made between the headset itself and Op-Art. VR further adds to the experience by contributing a sense of scale - large virtual objects actually appear large, which may not be immediately apparent on a computer screen. This is especially important when interpreting the works of Riley, who is known for the depth and scale she brings to her works. Additionally in a digital museum I can make objects behave in ways that are impossible in real life; this gives me a lot of freedom when curating the museum.

The final product is an interactive VR museum containing digital recreations of the works of Bridget Riley. The experience has been developed for the SteamVR Platform, and optimized for the HTC Vive headset and controllers. Users have the ability to walk around the virtual space in room scale. Additionally they may teleport around the museum using a simple pointer mechanism; this allows the museum to be larger than the real-life play area. I have also included a digital “pamphlet” that provides some information / context about the work that the user is currently looking at. Below is a demonstration of these concepts:

Teleporting and Viewing the work

My intent in making this project was to explore VR as an artistic medium. What, exactly, does VR offer as opposed to traditional (2D) media? The way I see it, VR has three major advantages over traditional games/digital media. Firstly, VR is of course more immersive and makes the user feel like they are inside the virtual space. Secondly, the stereoscopic 3D that VR headsets offer adds a sense of scale and depth that is impossible on a 2D display. Lastly, in VR I can add virtual spaces that move in a way that is impossible in reality. The works of Bridget Riley are very compatible with these traits: in her paintings, Riley implies depth and movement through striking geometric forms. It should come as no surprise, then, that VR is an essential part of the experience. Without it, the pieces are significantly less striking.

Below I list each of the works, along with a corresponding blurb from the pamphlet.

The word ‘paradox’ has always had a kind of magic for me, and I think my pictures have a paradoxical quality, a paradox of chaos and order in one.

Blaze is unique in that it simultaneously captures Riley’s ability to render depth and movement. My rendering of Blaze attempts to echo both of these elements in a way that is striking and, in some ways, unsettling. Are you looking at a tunnel? Perhaps it is a flame, as the title suggests? O r are you staring down the barrel of a gun?

For me nature is not landscape, but the dynamism of visual forces, an event rather than an appearance.

Movement in Squares is one of Riley’s definitive pieces, and demonstrates her ability to encapsulate depth in its rawest form. I made the work so huge to capture this feeling. The user can teleport directly over the work as well to experience this sense of scale more directly.

I used to build up to sensation, accumulating tension until it released a perceptual experience

Fall hurts to look at; that, to me, is what makes it so interesting. In Fall, Riley implies a waterfall-like flowing motion while also creating optical resonances that are downright painful at times. Fall was the first work that I studied by Riley and introduced me to the basic idea of this project.

In general, my paintings are multifocal. You can’t call it unfocused space, but not being fixed to a single focus is very much of our time.

Untitled [Fragment 6/9] has a strange sort of unexplainable tension. Upon closer inspection, the various dots strewn across the canvas are quite random, but from a distance they are gridlike. The planetoids themselves, reminiscent of Kandinsky, similarly imply depth through their size.

The eye can travel over the surface in a way parallel to the way it moves over nature. It should feel caressed and soothed, experience frictions and ruptures, glide and drift. One moment, there will be nothing to look at and the next second the canvas seems to refill, to be crowded with visual events.

Untitled [Fragment 3/11] was definitely the most challenging work for me to decompose digitally. A complex system of unintuitive curves and surfaces, this (ultimately cylindrical) form is hard to understand even after staring at it for minutes.

I learned from Seurat this important thing about colour and light, that ‘a light’ can be built from colour. I learned a great deal about interaction, that ‘a blue’ in different parts will play all sorts of different roles.

Although Riley is most known for her grayscale works (such as the others shown here) she has also experimented heavily with color. Cataract 3 is similar in form to Fall (directly behind you), but it also integrates color into the work. Try stepping close to the piece to see how Riley constructed the colors in it.

Bridget Riley, the focus of my digital museum, is a well known contributor to the Op-Art (optical art) movement. Op-Art, an extension of abstract expressionism, focused on the utilization of Optical Illusions to imply different visual effects. Bridget Riley used these illusions in many cases to give her paintings a sense of depth and space. 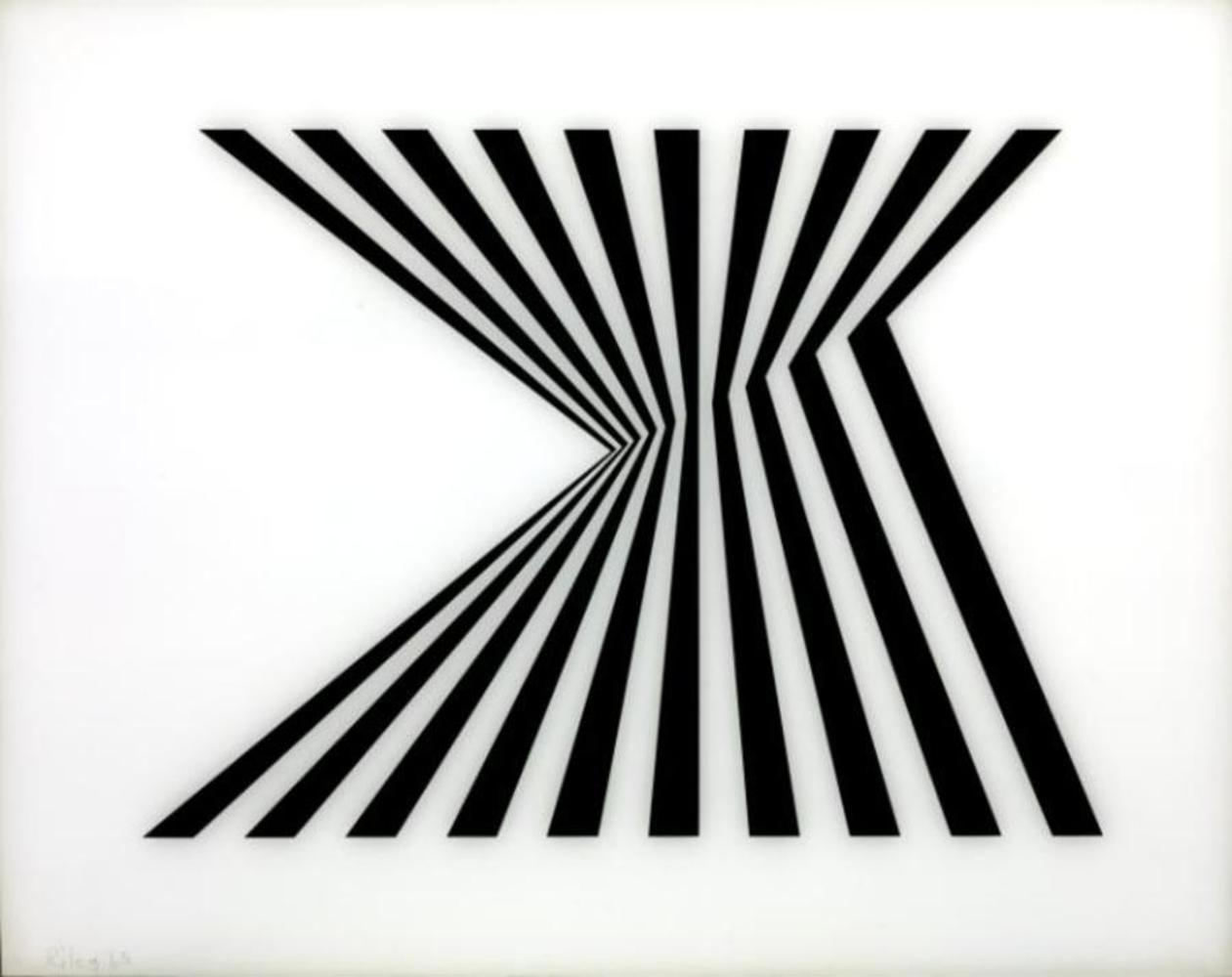 In other cases, she used Optical Illusions to imply movement and animation: 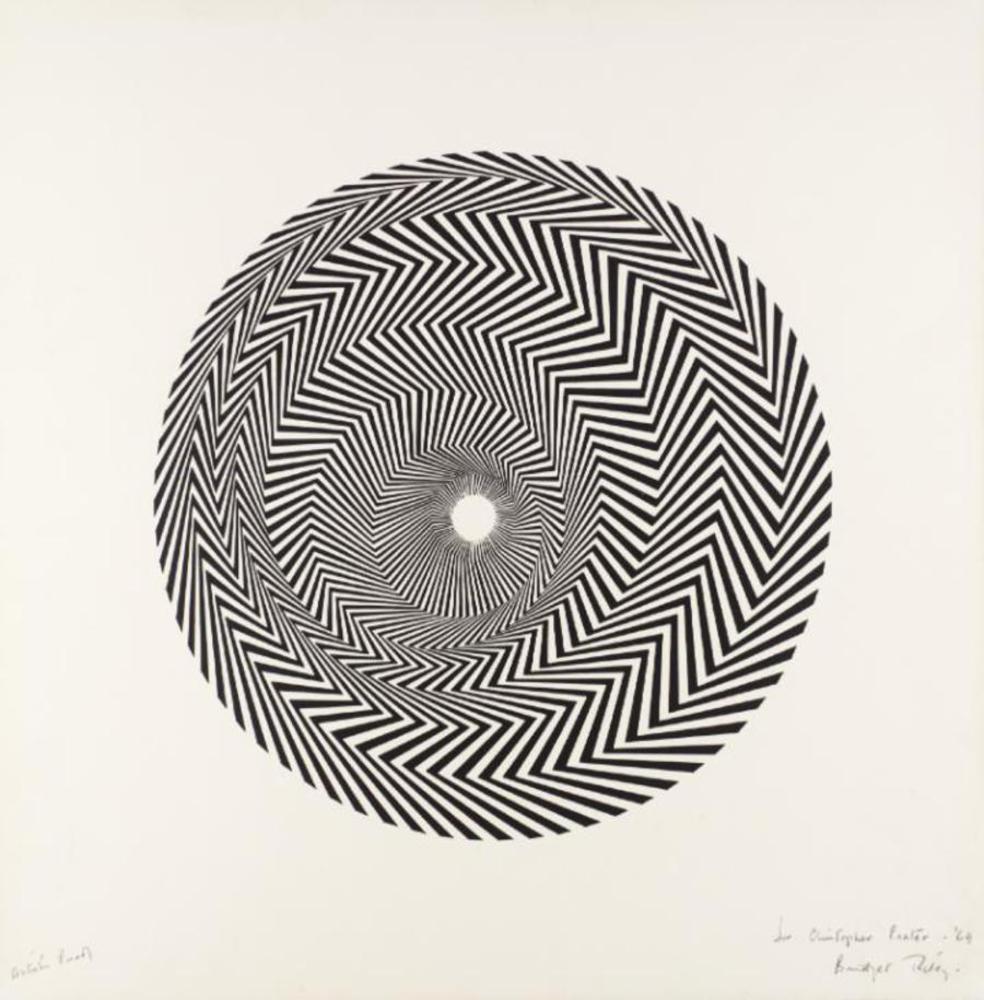 As the focus of the museum, Riley’s paintings are a clear focal point of my research when developing the experience. It is particularly important to break the works down into their atomic elements, and identify their implied movement or spaciality. This will allow me to reconstruct them in 3 dimensions.

As mentioned, one of the central aims of the project is to realize the two-dimensional implied depth of Riley’s paintings in a 3 dimensional medium (VR). It turns out that MonzaMakers, an Italian 3D printing company, has attempted to do something similar. Their goal was to transport the implied depth and perspective of Caravaggio’s Flagellation of Christ into the real world so that the visually impaired can feel the pieces and understand them. My goal is quite similar, but in a freer digital medium. 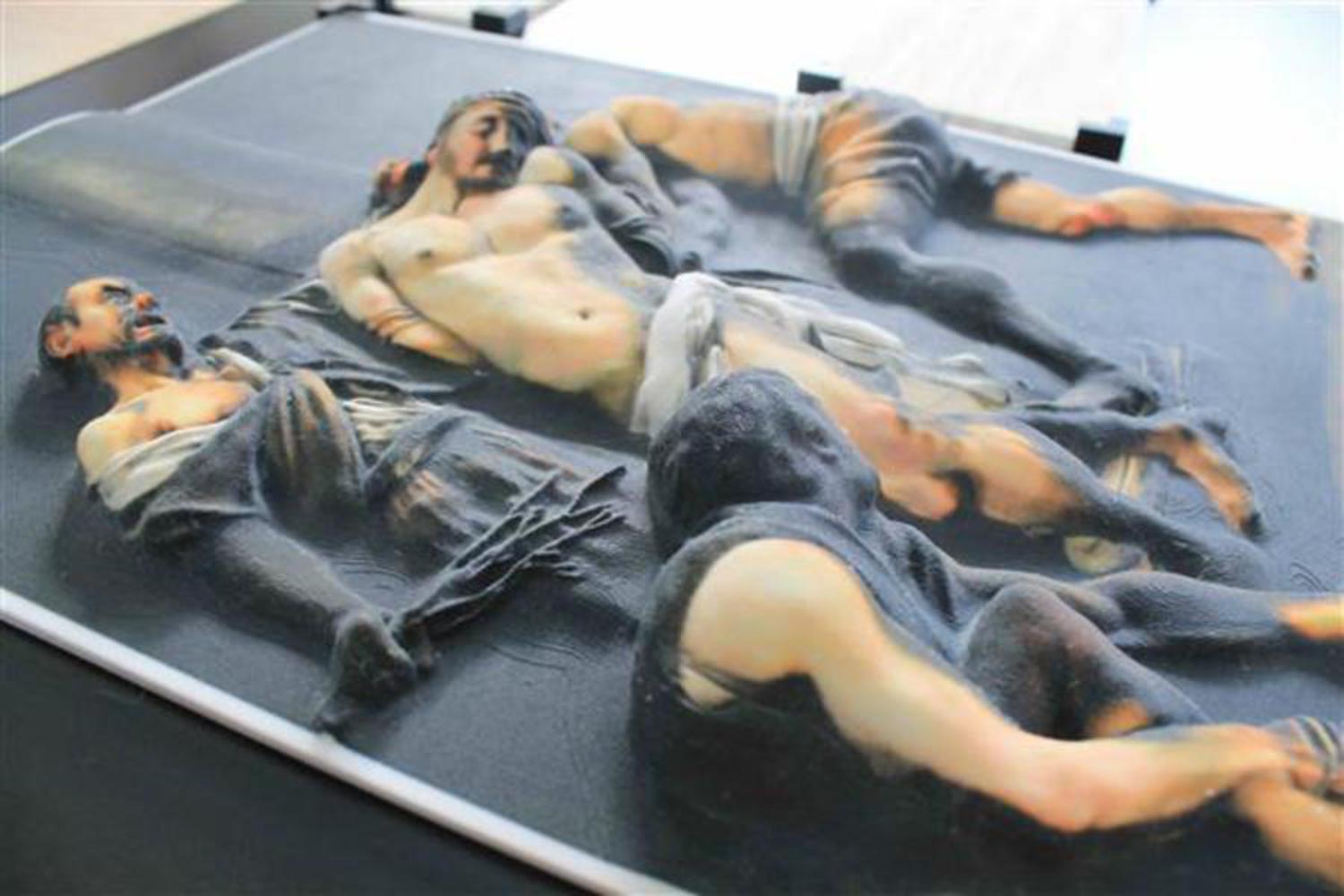 One excellent implementation of the aesthetic elements of Op Art in VR is Polytron’s game SUPERHYPERCUBE. Superhypercube is a simple game by itself, but it’s style and feel make it truly shine. I found the game’s successful utility of simple shapes and abstract geometry to create powerful and interesting spaces to be particularly applicable to Bridget Riley’s similarly abstract style. It has inspired me to experiment with similarly huge spaces in VR, to push the boundaries of what is even possible in a real-life museum.

The VR Museum of Fine Art

This is perhaps the most direct analogy I could find to my project. The VR Museum of Fine Art allows players to explore famous works of art in 1:1 scale - all curated in a digital museum. Perhaps the most useful aspect of this project to my own creation is the aesthetic realization of a museum in VR. Additionally I really liked the interactive elements of the museum - VR offers a unique opportunity to add interactive descriptions, etc to the artworks. 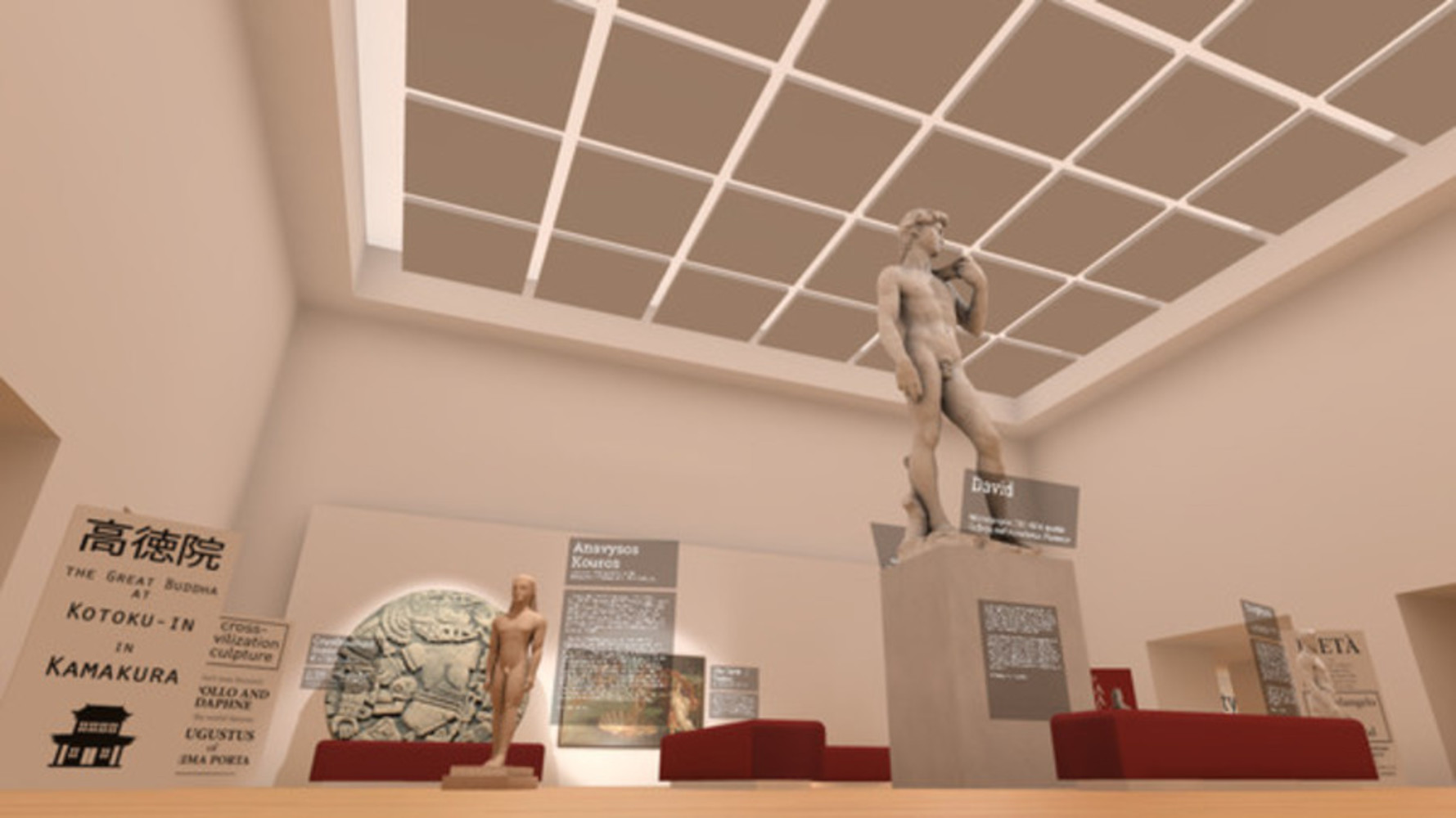 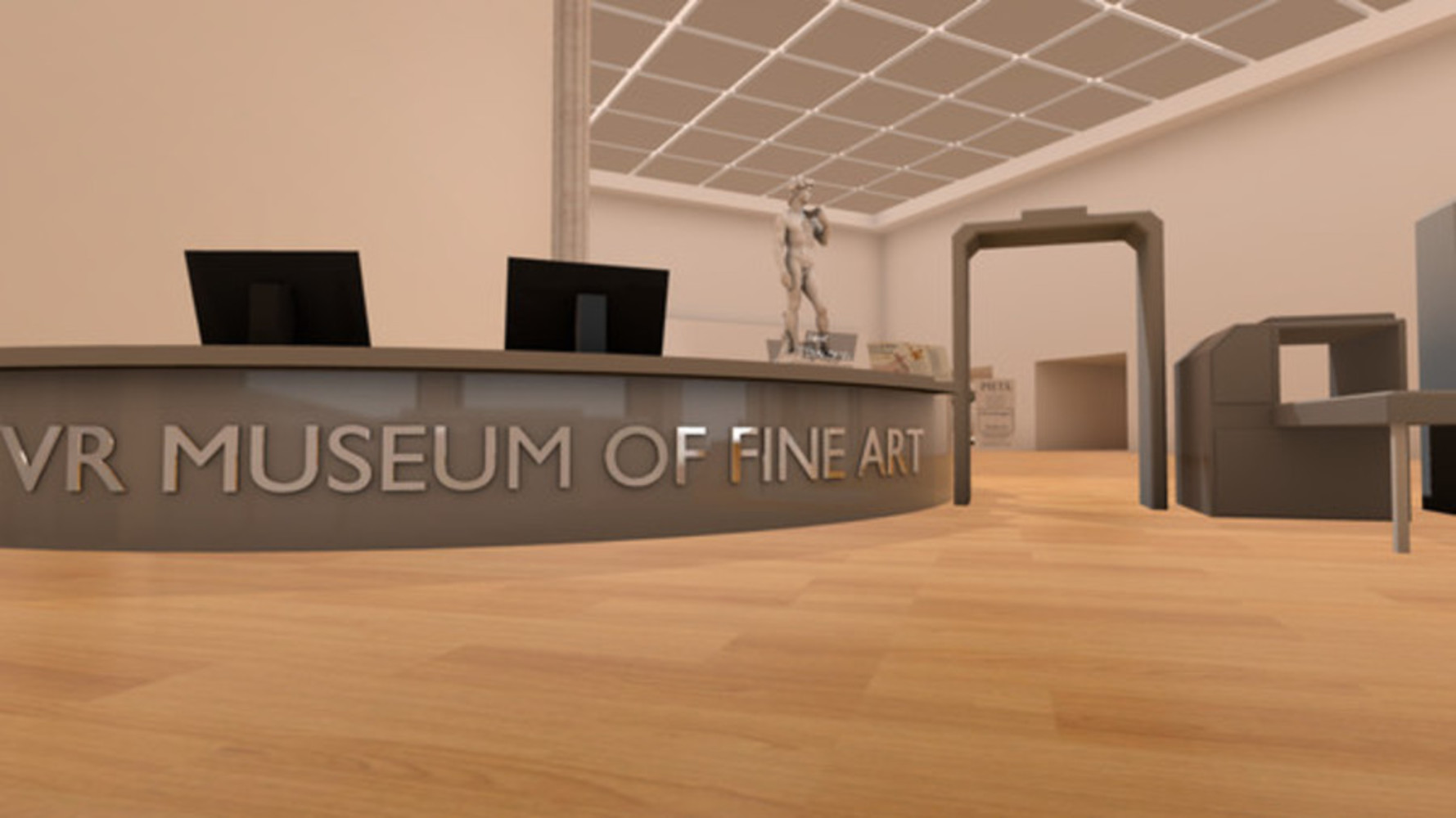 The experience is powered by the Unity game engine, and all art assets (including most of the pieces themselves as well as the environment art) were made in Blender (a 3D modeling suite). Additionally, some of the pieces (Fall and Cataract 3) are completely generated in code. I have outlined my specific process in creating some of these pieces in my briefs for Fall, Remixed and Animating Paintings (two previous iterations of this project). Since the previous version of the museum (Animating Paintings) I have added three pieces to the museum. I also redesigned the general layout of the museum and added VR support. I used the SteamVR API for HTC Vive integration. For locomotion (including the teleportation mechanic) I used my own open source HTC Vive Teleportation System for Unity that I developed last spring for another project. Below are some pictures of some of the assets I created for this project. 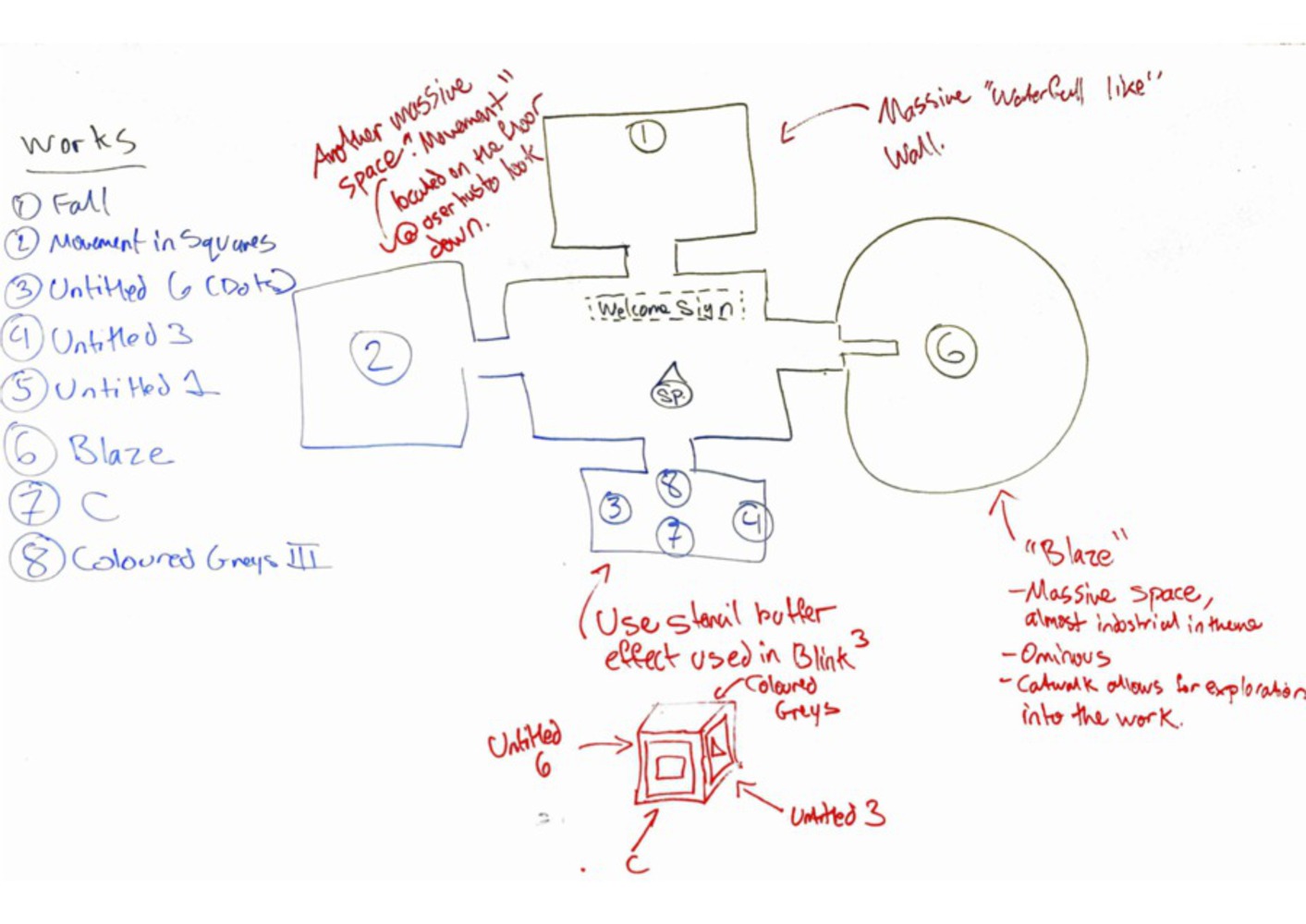 Initial layout planning for the museum. Pieces (7), (8), and (5) were dropped late in development and replaced with Cataract 3. Also, The effect discussed for the bottom room was dropped due to time constraints. 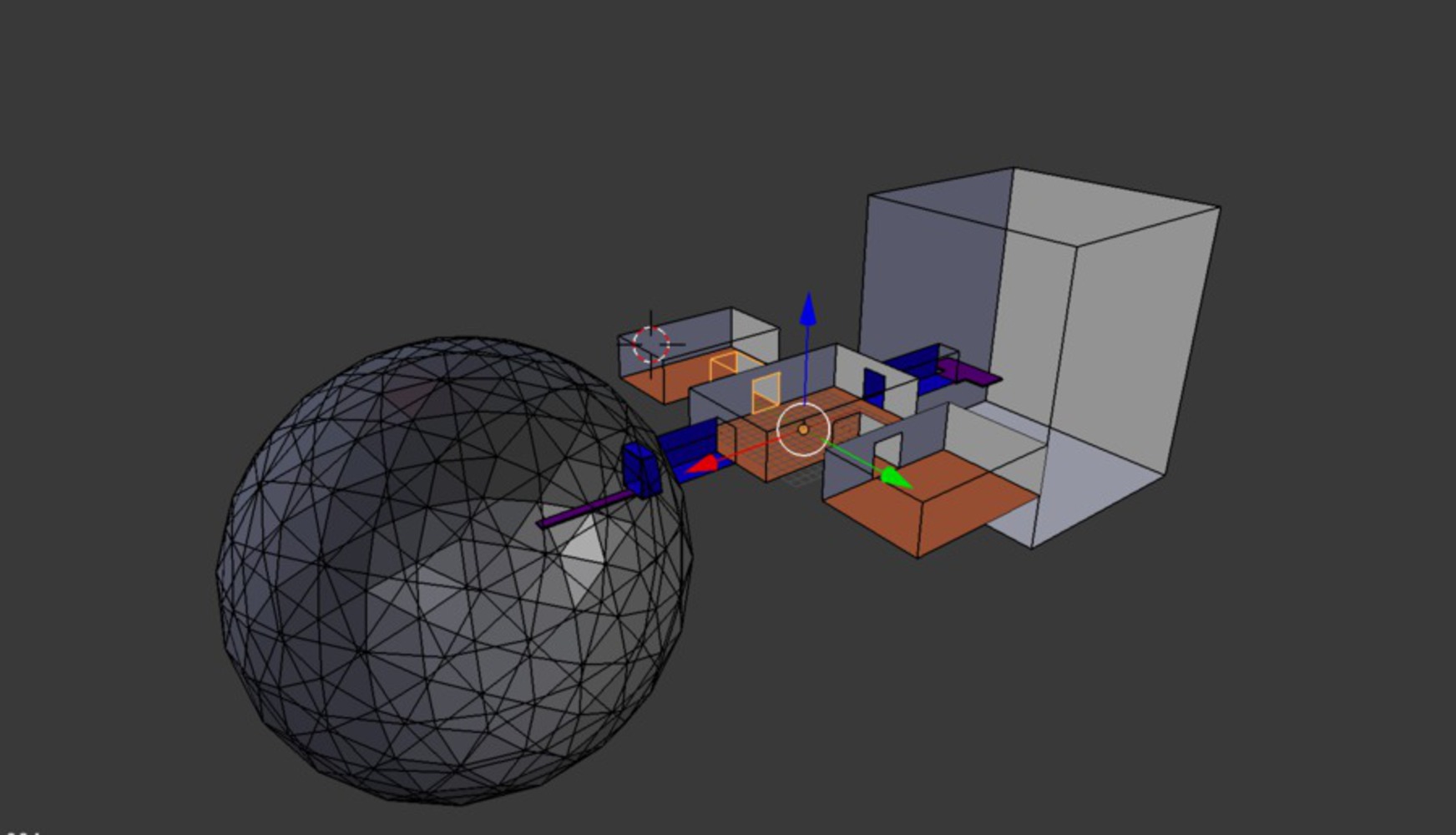 The entire scene, open in blender. 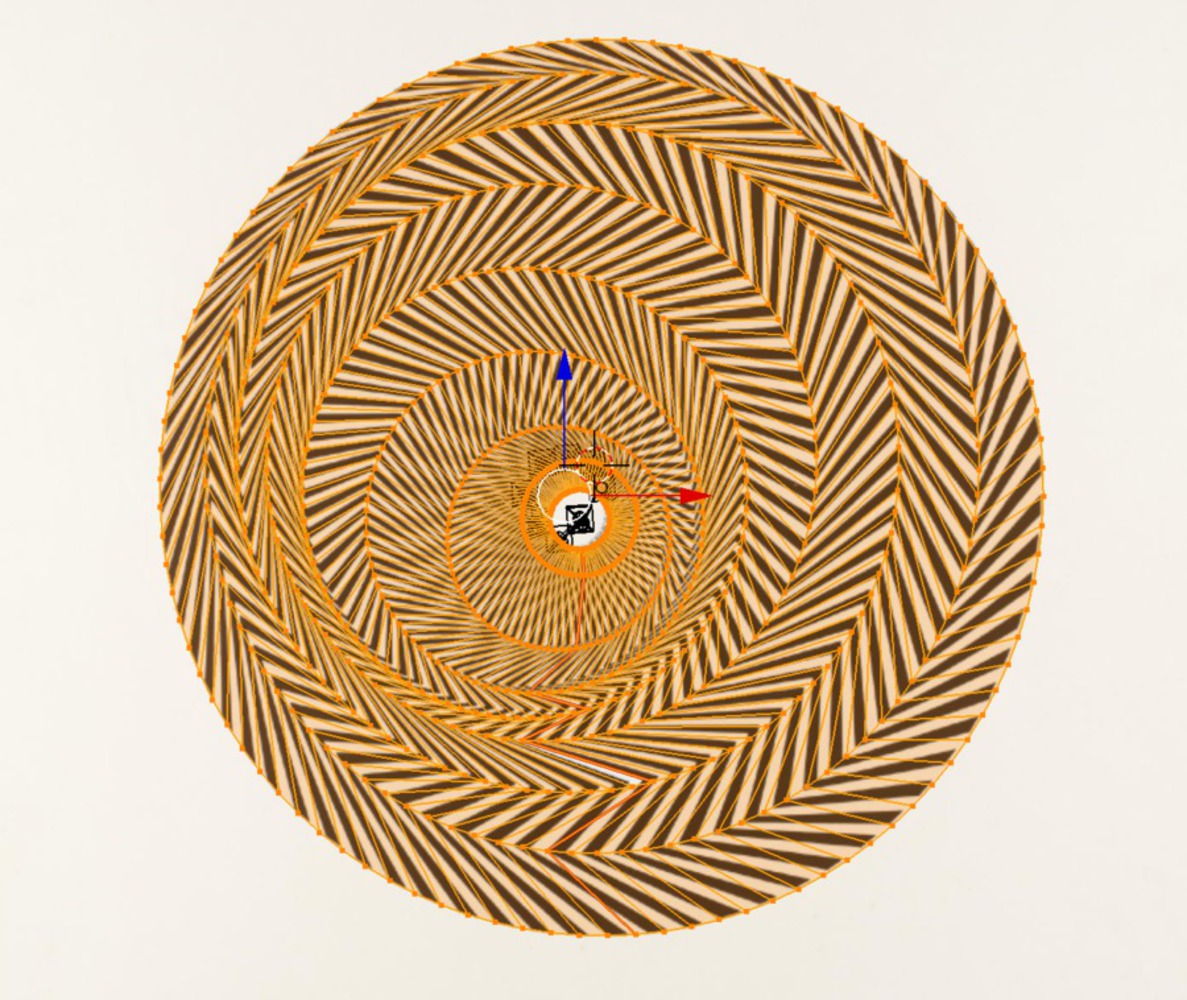 Wireframe view of my interpretation of Blaze in blender, with photo reference behind.

I’m really happy with how this project turned out. I noticed that, when presenting the final product, different people enjoyed drastically different parts of the experience. Interestingly, one player told me that the more surreal exhibits (Blaze and Movement in Squares) were out of place, whereas another player told me to make them even more strange and detached from reality. Similarly, some players never used the Pamphlet mechanic but others looked at the pamphlets more than the actual exhibits! In general, every player was interested in or impressed by some aspect of the experience, and I am very proud of that. I think there is still a lot of potential in this project, and I plan on expanding upon it further in the future. One way to do this is to simply add more exhibits and improve the overall polish and aesthetics of the existing environment. Another way is to add more interactivity - what if, for example, you could touch the exhibits in VR to change their animation / behavior?